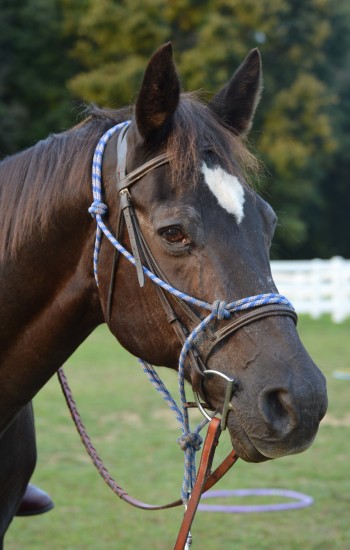 Saying that last goodbye wasn't easy, but he let us know it was time.

On November 10, 2020, Captain crossed the Rainbow Bridge as one of CTR's most beloved horses and friend to all. Our hearts are broken.

Captain, a registered Quarter Horse gelding, named Robbies Master, was foaled on March 11, 1986, in Kentucky. He was donated to CTR in December 2008, where he began his next career as an adaptive riding horse. The young lady who donated him to CTR wanted to make sure he had a good home, an important job, and lots of people to love him. We
promised just that.

He was a well-trained, versatile lesson horse, bought, sold, and given away so many times, the AQHA doesn't have an accurate accounting of all of his owners. In his younger years, he was used for trail riding and showing in addition to being a lesson horse. Through some extensive research into his past, his last three owners confirmed that he had quite the personality, sometimes grumpy and always opinionated, but completely reliable, dependable and honest.
We found that to be true as well.

Captain knew what his job was and he did it well, but his first couple of weeks at CTR were spent figuring out his place in our small herd. After a few "pasture chats" with Victor, some ending up in bumps and bruises, Captain settled in. His most ardent admirer was our little grade mare, Crystal. They became constant companions with Captain taking care of her as she aged and eventually lost her eyesight due to Cushing's disease. He was her seeing eye horse.

Captain was the chosen adaptive lesson horse for hundreds of children and adults with differing abilities, as well as veterans. He participated in hundreds of hours of equine assisted learning and psychotherapy sessions. Even when he was retired from mounted lessons, he contributed to learning by being the subject on caring for older horses. He was a favorite among CTR's volunteers.

He lived a life of service and we promised him a forever home. Captain was our "go to guy", our lovable Grandpa Horse, our Black Beauty. We are grateful for him and will miss him forever.