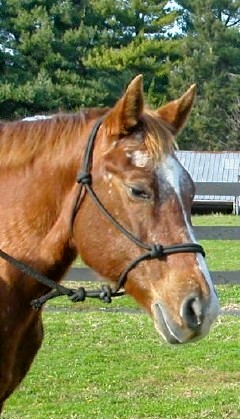 I'd like to tell the story of a trusting, long time relationship between two souls. Socks was my friend, my confidante and my partner.

We came into each other's lives in May 1987. I had finally found a reasonably paying job after graduating from college two years earlier. I put the word out that I was interested in buying a horse after being "horseless" for the last 6 years. Sure, I rode and competed, but there is nothing like owning your own horse. It was love at first sight. She was the first and only horse I looked at. I was 23 and she was 6.

We spent the first year trying NOT to kill each other with our stubbornness and willfulness. Within the first three months that we were together, I ended up in the ER with a concussion, brush burns and assorted other injuries. Words to the wise: wear a helmet and use a saddle and bridle! However, we hung in there together, exploring the beautiful countryside near Valley Forge. We slowly figured each other out and though she would always "do something" to mess with me, I began to see the humor in her.

I moved to Maryland in 1993 and left her behind in Pennsylvania at my friend's dairy farm until I got settled and found a place for her to reside. It took a year…a very long year. Let's just say, she didn't like cows and she figured out pretty quickly that my friends and their hired help didn't know much about horses. We saw each other, but I was "in love" and the relationship took up the majority of my time and energy so she cultivated her obnoxious side. I should have put the horse first!

When I settled in Harford County in 1994, I moved Socks to a boarding stable in Joppa. She made friends quickly and we began the process of reconnecting. It wasn't easy. She hated working in an arena and would go in every direction but forward. Once we got back on the trails, we started to get back in sync with each other. The next ten years were spent trail riding and having fun. Everyone knew the red chestnut with the spotted butt, who made funny noises with her lips. She was quite a character.

Once I finally figured out my life's work, Socks and I teamed up to become therapeutic riding instructors. Me with NARHA and she with the riders. She had the innate ability to take the wiggliest rider and calm them down. She always offered her muzzle to be patted and her ears to be rubbed. A few years ago, uveitis (moonblindness) robbed her of her eyesight and ringbone took away her steady gait. Yet, she was always ready to carry one of our special riders on her back. We adapted the way we lead her around the arena, tapping obstacles on the ground with our toes so she could "hear" where they were. She relied willingly on her horse leaders to keep her on course and the rider safe in the saddle.

We moved to Tuckaway Farm in September 2008 and she loved her paddock that she shared with her new friend, Sally. Sally was Socks' eyes. She would wait for Socks then take her out into the paddock to graze. She showed her where the hay piles were and always allowed Socks' to come in first. Socks could be as crabby as she wanted to be and Sally just moved out of the way. Socks’ and Sally's stalls were directly across from each other.

Socks started to lose her energy and drop weight at the beginning of June. Her appetite was good and everything appeared to be "working", but she had lost her luster, her spark that was so much a part of who she was. Her health had been declining with no clear reason. It was obvious that only heroic measures could be taken and there was no guarantee of her recovery. She was humanely euthanized on Saturday, June 20. Her last opportunity to teach was with veterinary students at the University of Pennsylvania’s New Bolton Center. The necropsy revealed that she had cancer throughout her body. Making the decision to let her go was one of the most painful decisions I have ever made. And it was the right thing to do for Socks, my loyal, trusted friend. Being her steward and advocate was an honor.

The many condolences and remembrances have provided healing for me. I was lucky to see Socks nearly every day for the last year of her life. I have been reminded of all the lives she touched over the years. I am also reminded that there may not be a tomorrow.

I may be the face of CTR, but she was the heart.

Live in the moment. 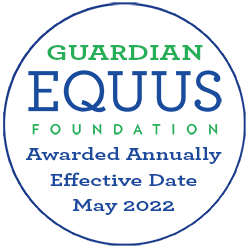 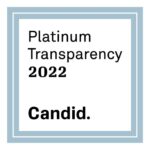 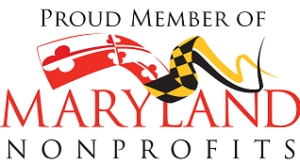